MARKET DATES
FIND A FARMERS' MARKET
WHAT'S IN SEASON?
WHAT CAN I BUY?
Markets >

Sandgate 'The Market by the Sea' 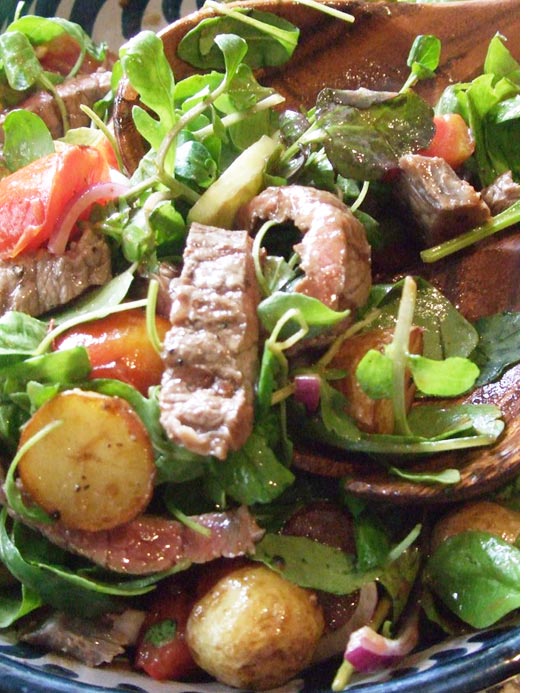 Rub the black pepper into the steaks and season with salt. Heat half the oil in a griddle pan or non-stick frying pan. Cook the steaks over a high heat on both sides for 4 - 8 minutes (depending on how you like your steak cooked), turning once until well browned on the outside but still very pink in the middle. Cook the tomatoes alongside the steak cut sides at the same time. Remove the steak and tomatoes from the pan and leave to rest for 5 minutes.

Cut the potatoes into chunks if large. Add to the pan and fry over a medium high heat for 5 minutes until crisp and golden. Arrange the watercress in a salad bowl and add the onion, cucumber and tomatoes with juices, and potato. Slice the steak on the diagonal and whisk the remaining olive oil with the vinegar and seasoning.

Add the steak to the salad, pour over the dressing and toss together. Serve.

Recipe by author, food writer and editor Mary Gwynn
Her books, The WI Cookbook: The First 100 Years (Ebury) and Back in Time for Dinner (Bantam Press) are available from good book shops.